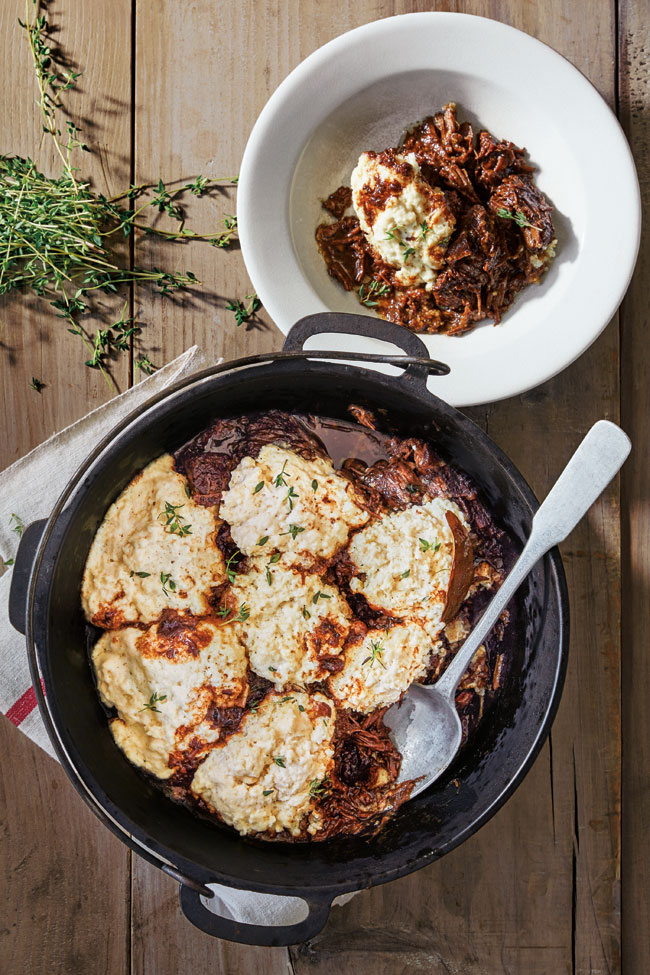 As fans of the hit series Downton Abbey know, food is often the centrepiece of life at the country estate. While elegance, not to mention a double dose of delicious drama, is served up in Downton’s grand dining room, there’s nothing like a trip downstairs to visit the steadfast cook Mrs. Patmore’s bustling kitchen when comfort food is required.

Tuck in on a snowy, wintry evening with these classic recipes from esteemed British food historian Annie Gray’s  The Official Downton Abbey Cookbook. The book, which has been dubbed the Downton food “bible,” includes more than 100 recipes that reflect the influences on tables during the Downton era between 1912 and 1926. Beef stew is a true servants’ dish: cooked low and slow, hard to spoil and ﬁlling for hungry bellies. This version comes with rib-sticking dumplings, so it’s a real meal in a pot. It features several times on Downton Abbey, both as a dish in the servants’ hall and at the soup kitchen set up for starving and injured soldiers in the episodes set during the Great War. The secret is to have a cut, such as brisket, that has some fat with it and that will beneﬁt from long cooking. Beef was considered a symbol of Britishness, and a great deal of it was consumed both below and above stairs in country houses. In season 1, Daisy fails to sabotage the beef stew during her short-lived campaign to ruin the dishes so Mrs. Bird won’t be seen as a better cook than Mrs. Patmore.

Ingredients for the dumplings

Heat the lard in a heavy-bottomed pot over high heat and fry the lardons (bacon cut into strips about 1-inch/2.5 cm long and 1/4-inch/6 mm wide and thick) and beef until browned. Reduce the heat to low, add the onion, and cook, stirring occasionally, until translucent, 3 to 5 minutes. Sprinkle everything with the flour and fry, turning all the ingredients regularly, for a few more minutes. Add the vinegar, Worcestershire sauce, treacle, cloves, bay leaves, beer, and water as needed just to cover the beef. Season with salt and pepper, bring to a boil, turn down the heat to low, and cook gently, stirring occasionally and adding a little more water if the pan begins to boil dry, until the beef is tender, about 3 hours.

Once the beef is cooking, make the dumplings: Stir together the flour, suet, baking powder, salt, rosemary, and a little pepper in a bowl, then mix in enough cold water (7 – 8 tablespoons/105 – 120 ml) to form a stiff paste. Divide the paste into eighths, shape each portion into a ball, and pop the balls into the pot to cook with the beef for about 2 hours.

At the end of cooking, using a slotted spoon, transfer the dumplings and beef to warmed individual plates. Turn up the heat and reduce the cooking liquid to a good sauce consistency, then spoon an equal amount over each serving.

The flour is there to help thicken the sauce, but you can skip the flour and use an alternative thickener at the end. If you really like dumplings, double the dumpling recipe and serve each diner two dumplings. You can, of course, vary the spices and herbs. The original recipe specified mild for the beer, but the stew is more oomphy made with stout. You can also throw in some robust vegetables, such as carrots, turnips, parsnips or celery root, if you want to bulk it up more.

2. Cauliflower Cheese – Serves 4 as a side dish

The recipe comes from Everyday Cookery by Isabella Beeton, who was long dead by 1913 when it was published. She was the author of the best-known historic cookery book in Britain, Beeton’s Book of Household Management, ﬁrst published in 1861 but in print continuously ever since. The original book, a mixture of strong, empowering language and utterly garbled recipes (Isabella plagiarized freely to compile her volume), dealt not only with cookery but also the running of a household. Aimed at the rapidly increasing urban middle classes, it set out to help women who had not necessarily been brought up with servants but who now found themselves married to businessmen and expected to hire and ﬁre staﬀ, care for their families and put on impressive dinners in hope of climbing the social ladder. It was immensely popular, with some 60,000 copies in its ﬁrst year of publication. Beeton herself died only four years after it came out, but the book, which would not have been used for upstairs dishes but is perfect for the servants’ hall, was regularly updated by its publishers. This version of cauliﬂower cheese is quite diﬀerent from the original recipe.

2 tablespoons unsalted butter, plus more for the baking dish

Ingredients for the sauce

Melt the butter in a large, heavy-bottomed saucepan over medium heat. Add the florets, sprinkling them with the flour. Keep them moving until they start to brown, about 5 minutes. Add the water, stir well, turn down the heat to low, cover, and cook until tender but still fairly firm, about 5 minutes.

Meanwhile, make the sauce. Melt the butter in a saucepan over medium heat, then whisk in the flour until a smooth, thick roux forms. Reduce the heat to low and continue to stir until the roux is a very light brown, about 5 minutes. Add the hot milk, a little at a time, whisking vigorously after each addition so no lumps develop. When all the milk has been added and the sauce is smooth and creamy, season with the cayenne, nutmeg and black pepper. Add the cheese, stir until melted, and remove from the heat.

Drain the cauliflower and transfer it to the prepared baking dish. Pour the sauce evenly over the top and sprinkle with the cheese. Bake until the top is nicely browned and bubbling, 10 to 15 minutes. Let cool slightly before serving so the cheese crisps up and you don’t burn your mouth on the molten sauce.

This is an English classic, and done badly, it remains the source of nightmares for many people forced to prepare it in cookery lessons at school (where it was often done with a whole cauliflower, served soggy on the outside and raw in the middle). The Maillard reaction, which happens when food is browned, adds much-needed depth of flavour and nuttiness to both the sauce and the cauliflower here. If you want an authentic taste of how bad British cookery can be, however, don’t brown the cauliflower first, make a plain white sauce, and use factory-produced mild Cheddar cheese.

The servants’ hall table at Downton is usually laden with batter puddings, potatoes, stews and vegetables that are cheap and ﬁlling. Rather than being carefully molded and garnished, the dishes are typically served in the vessel they were cooked in and, while some of them take a long time to simmer or bake, the eﬀort and time involved in making them is minimal. Toad-in-the-hole was typical of servants’ fare in the early 20th century, as it was cheap, easy, and versatile. The name dates back to the 18th century, though it’s unclear why the meat was called a toad — possibly because it peeps from the batter like a toad from its burrow.

Butter, lard, or pan drippings, for preparing the pie dish

Onion or meat gravy, for serving

To make the batter, whisk together the milk, flour, salt, and eggs in a bowl until thoroughly mixed. Set aside for 15 to 30 minutes.

Batter puddings like these can be used with any filling, including fruit for a sweet version. Toads were frequently recommended for eking out small amounts of leftover meat and vegetables. During the food shortages of the First World War, one author suggested adding chopped tomatoes and onions to bulk out the “minced meat of any kind.” If you are using leftover cooked sausage or small meatballs for this recipe, there is no need to brown them before adding the batter.

A version of this story was originally published on Dec. 2, 2019.

We’re Doing It Downton Style: What Life Is Like at Highclere Castle

health department near me