Hoping to restore some normalcy after fleeing the war in Ukraine, thousands of refugees waited in long lines last Saturday (March 19) in the Polish capital of Warsaw to get identification cards that will allow them to get on with their lives – at least for now.

Refugees started queuing by Warsaw’s National Stadium overnight to get the coveted PESEL identity cards that will allow them to work, live, go to school and get medical care or social benefits for the next 18 months.

Still, by mid-morning, many were told to come back another day, as the demand was too high even though Polish authorities had simplified the process.”We are looking for a job now,” said 30-year-old Kateryna Lohvyn, who was standing in the line with her mother, adding it took a bit of time to recover from the shock of the Russian invasion.

“We don’t yet know (what to do),” she added. “But we are thankful to the Poles. They fantastically welcome us.” 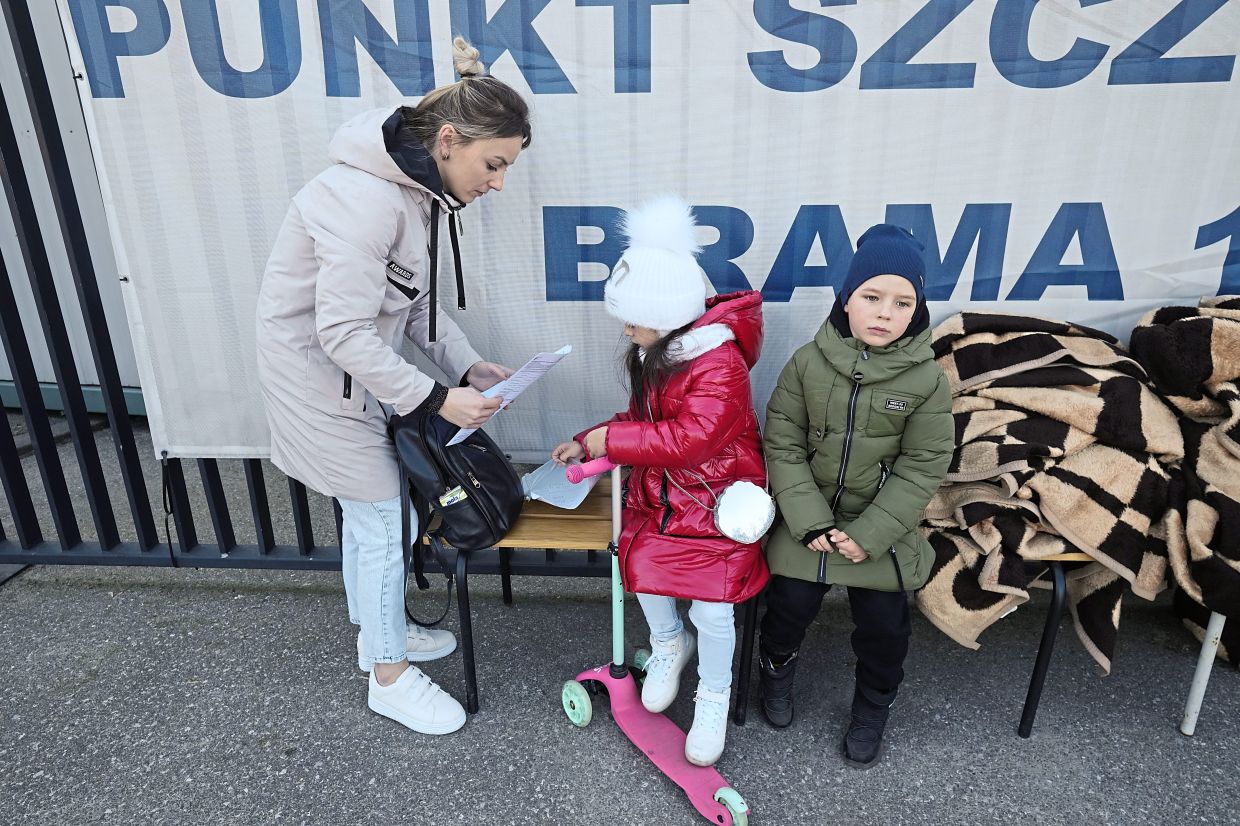 A Ukrainian woman with children looking at paperwork outside a special application point at the National Stadium in Warsaw, Poland, on March 19.

Maryna Liashuk said the warm welcome from Poland has made her feel at home already. If the situation worsens, Liashuk said she would like to stay permanently in Poland with her family.

“If the war ends and if there is someplace to return to, we will do that. If not, then we simply will remain here,” said Liashuk.

Poland has so far taken in more than two million refugees from Ukraine – the bulk of more than 3.3 million people that the United Nations says have fled since Russia invaded Ukraine on Feb 24. Hundreds of thousands more have also streamed into Hungary, Slovakia, Moldova and Romania.

Most of the refugees fleeing Ukraine have been women and children, because men aged 18 to 60 are forbidden from leaving the country and have stayed to fight.

Polish authorities said more than 123,000 refugees have been given the ID numbers – including more than 1,000 each day in Warsaw – since the programme was launched March 16. 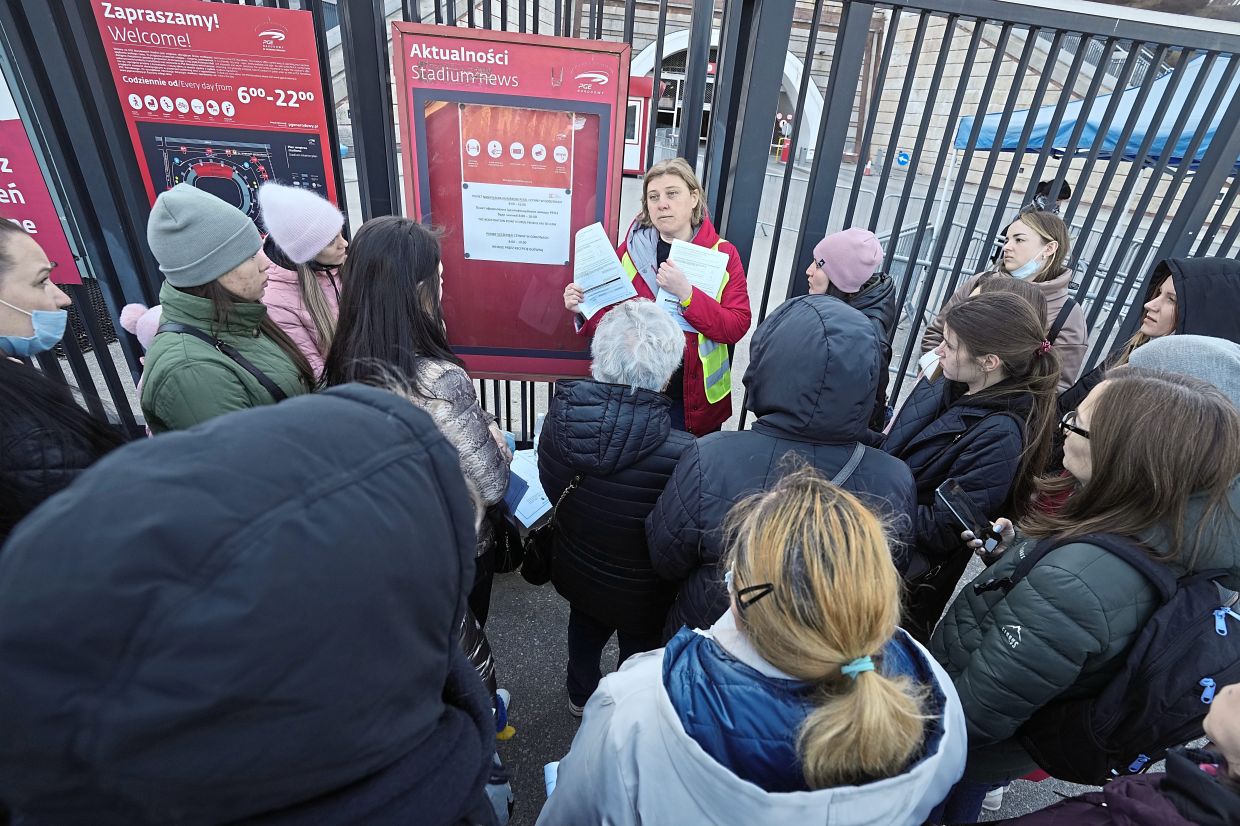 Hundreds of refugees from Ukraine waiting in line to apply for Polish ID numbers that will entitle them to work, free health care and education, at a special application point at the National Stadium in Warsaw, Poland, on March 19.

Svetlana, a Ukrainian woman from Ivano-Frankivsk who has lived and worked in Poland for over 10 years, has had relatives come now to Poland. She said receiving the Polish ID numbers will make a huge difference for everyone from Ukraine.

“This is really so important to us that we can officially look for work, send children to school and be active here,” Svetlana said. “It really changes the way we feel here.”

Refugees can receive a one-time benefit of 300 zlotys (RM298) per person and a monthly benefit for each child under 18 of 500 zlotys (RM497). Those who find jobs will have to pay taxes just like Polish workers.

Pavlo Masechko, a 17-year-old from Novovolynsk in the Volyn region of western Ukraine, has been trying to rebuild his life in the southeastern Polish city of Rzeszow. Before the war, Masechko had plans to come to Poland to study when he finished high school, but he says being forced out of his country by war is something completely different. 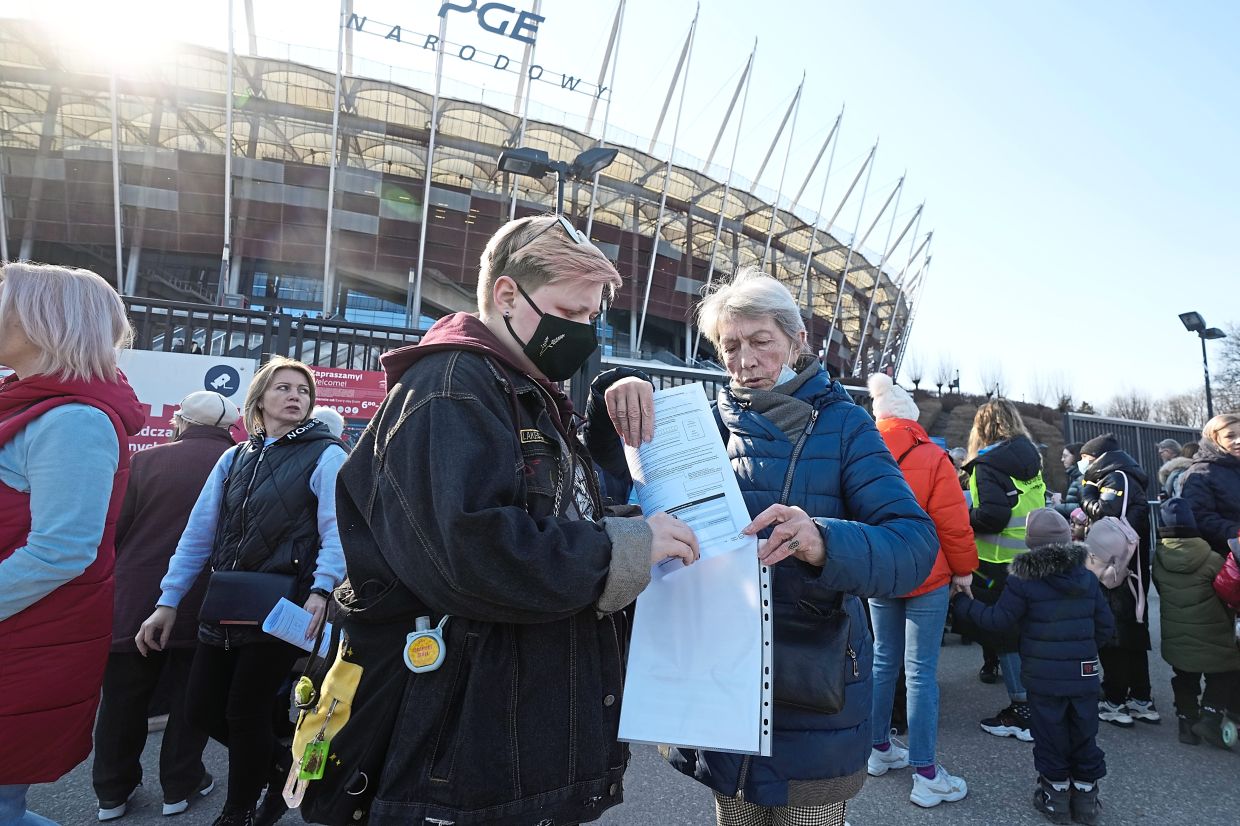 Ukrainian women packing away documents at a special application point at the National Stadium in Warsaw, Poland, on March 19.

“It is so stressful to leave your country like this,” said Masechko, who has joined a local school in Poland since arriving. Now, Masechko’s Ukrainian teacher is seeking to organise classes online that were suspended when Russia attacked.

Many of the refugees from Ukraine have since moved on to other countries in Europe, mostly to stay with friends and family. Some, however, have chosen to go back home even as the end of the conflict is nowhere in sight.

Among them was 41-year-old Viktoria, who was waiting on March 19 with her teenage daughter Alisa to board a train back to Zhitomyr in central Ukraine.

“For the last five days it has been quiet,” said Viktoria. “Our local authorities are good. They prepared everything for us there so we can go back to work, have normal life and children can have online education.”

Alisa said she is not afraid to return and wants to reunite with the rest of the family who are still in Ukraine.

“My relatives are there,” she said. – AP